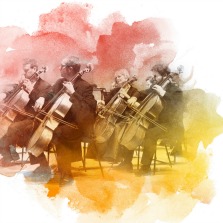 Come and celebrate Last Night of the Proms with the Royal Philharmonic Orchestra!

Following our hugely successful performances in 2014, the Royal Philharmonic Orchestra are delighted to be returning to The Baths Hall for a sensational season of classical concerts in 2015. Known as the ‘Nation’s Favourite Orchestra’, they are delighted to be returning to Scunthorpe with an exciting programme which is full of musical colour. We hope you can join us.